AND BREATHE…. The market is under control.

There has been a lot of chatter in recent months about the property market – Australian’s favourite pastime. There are a number of reasons why a market booms, low interest rates, availability of cash, strong economic conditions etc… but I’ve been saying for a while that the current boom has a lot to do with the lack of supply which is heating up the market. The current available properties to sell, Australia-wide, hasn’t been this low since 2010 with only around 250 000 properties available to buy. While the stock levels are the lowest in a decade, it’s quite typical of a recovering market as potential sellers hang onto their properties as they wait for the market to rise.

The latest CoreLogic home value index shows Sydney dwelling prices have risen by 2.3 per cent on a rolling four-week basis to April 18. Melbourne values were up by 1.5 per cent, Brisbane by 1.8 per cent, and Perth by 0.9 per cent.

Although robust, the figures are lower than the gains achieved in March when Sydney home values rose by 3.7 per cent, Melbourne and Brisbane by 2.4 per cent, and Perth by 1.8 per cent. 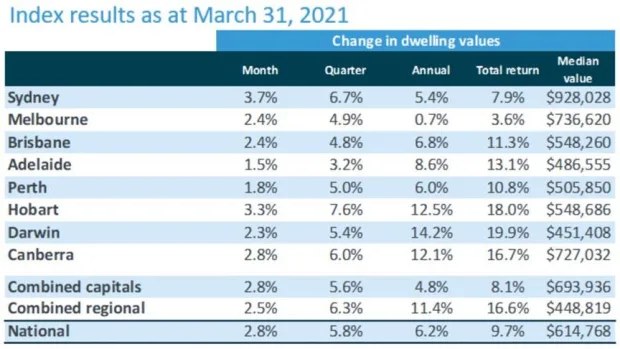 The slowdown comes as the government winds back support packages such as JobKeeper.

“This is the first clear sign of a slowing pace of growth,” said Tim Lawless, CoreLogic’s research director.

“This is showing a clear and broad-based slowdown in the rate of housing value growth – a trend that has been evident since late March.”

Auction clearance rates have also slowed, moving from a recent high of 83.1 per cent in the last week of March to 78.6 per cent over the week ending April 18.

There have been more listings hitting the market. In the four weeks ending April 18, 26,470 new listings were added to the market – the most in a 28-day period since 2016. New listings are now sitting 17 per cent above the five-year average.

But this does not mean housing values are about to decline, Mr Lawless said.

“I don’t think prices are going to fall from here on, we’re a long way from that,” he said. “I think we’ll continue to see prices rising throughout this year and probably next year, just at a slower rate.”

Domain’s senior research analyst, Nicola Powell, agrees that there is still a lot of heat in the market.

“I think this boom still has some legs, and I don’t think prices will fall anytime soon,” she said.

“We’re still seeing robust activity in the marketplace, so I think we will continue to see price growth, although it won’t be as high as what we saw in that first quarter.”

Given the expected growth in many cities and thriving regions, it’s a good time to review your loans and properties and think about growing your portfolios.

For people who have been outpriced in the Sydney market, it is worthwhile seeking proper advice on other markets. Investing in other high-growth areas could be the right strategy to home ownership in Sydney.